The S.S. Jacob Luckenbach has lain undisturbed for nearly 50 years off the coast of San Francisco.

A few divers have explored the old wreck, but until February 2002 it was largely forgotten.

Unknown to anyone, though, the Luckenbach has been quietly leaking fuel oil and killing thousands of birds. 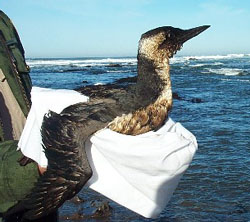 The death toll over the years is likely enormous. More than 1,700 oily birds have washed up dead or injured since November, and no one knows how long the wreck has been leaking. But oil samples reveal the 468-foot freighter is responsible for at least four other mystery spills in the last decade, affecting a minimum of 35, 000 birds.

“It’s possible, over the lifetime of this spill, that this particular oil may have affected 100,000 birds,” said Bill Castle, manager of the state’s Petroleum Chemistry Laboratory, part of California’s Office of Spill Prevention and Response.

It took exhaustive detective work by state and federal officials to track down the source of the spill. They took oil samples from visiting vessels and scoured wreck archives to try and discover the culprit.

The first breakthrough came in early February, when two recreational divers brought back oil samples taken from the area above the Luckenbach, about 15 miles southwest of San Francisco.

Two or three days later, Vortex Diving Co. was hired to send a submersible remotely operated vehicle (ROV) down to the wreck, located in 175 feet of water. Small amounts of oil could be seen moving about in one of the cargo holds, and state and Coast Guard personnel also gathered samples of oil they saw on the surface.

State and Coast Guard labs then worked separately to match or ‘fingerprint’ the samples with feathers from oiled birds, and proved the same oil was responsible for not only the recent spill but four earlier mystery spills.

Castle described some of the techniques used by the state lab to match the oil. After oil is extracted from bird feathers, it is cleaned and concentrated, then analyzed through gas chromatography and mass spectrometry. The results provide information on the molecular composition of the oil, which is made up of thousands of compounds. Oil in ships contains residue left over from previous cargo or fuel, allowing samples to be matched with pinpoint accuracy.

In the Luckenbach’s case, it wasn’t until mid-March – when OSPR’s lab matched an oil sample taken directly from the wreck – that scientists could say they were 100 per cent sure the vessel was the culprit.

WHO PAYS THE TAB?

Meanwhile, detective work of a different kind is being carried out by state and federal lawyers to find a responsible party to pay for cleanup and salvage costs.

The original vessel owners, Luckenbach Steamship Co., and its insurance company no longer exist. However, lawyers are checking the corporate ownership trail to see if they can find someone to pick up the tab. For now, costs are being billed to the Oil Spill Liability Trust Fund, set up by the U.S. government in the wake of the Exxon Valdez disaster.

Cleanup costs had already reached $1.5 million by early March, according to Dana Michaels, spokesperson for California’s OSPR. Bills will mount rapidly, as a lucrative contract to deal with the wreck will soon be awarded following discussions between the Coast Guard, state officials, and the U.S. Navy’s Supervisor of Salvage.

The Coast Guard has invited 22 diving and salvage companies to submit proposals by March 18, although on-water salvage is unlikely to begin before the end of April.

It won’t be an easy task. The bow and stern have broken away from the hull and the superstructure has partially collapsed, so total wreck removal isn’t really an option. Salvage work will likely involve removing oil or sealing holds in the wreck.

“This is a very complex project,” said Lt. Tim Callister, from the Coast Guard’s marine safety office in San Francisco.

How the S.S. Jacob Luckenbach ended up at the bottom of the ocean is a story in itself.

The death blow came in an undignified manner, when she was struck by a sister ship on July 14, 1953. It was foggy, and the Luckenbach had just left San Francisco bound for Japan and Korea, carrying military equipment and mail. Around the same time, Matson Navigation’s Hawaiian Pilot was approaching San Francisco from Honolulu.

Both vessels saw each other on radarscopes when they were miles apart. Unfortunately, the master of the Hawaiian Pilot mistook the Luckenbach for the San Francisco Lightship. He ordered course changes that resulted in the two vessels colliding, according to a Marine Board inquiry. The Master of the Jacob Luckenbach, meanwhile, thought the two vessels would pass clear. The inquiry later criticized both masters for not plotting a series of bearing and ranges.

The bow of the Hawaiian Pilot penetrated the hull of the Luckenbach at right angles, and the latter sank within 30 minutes, although the crew were all rescued. For its part, the Hawaiian Pilot was able to limp back to San Francisco for repairs.

As for lab manager Bill Castle, he’s especially satisfied they have found the source of the leaking oil after all this time.

“I got into this work because I love wildlife,” he explained. The common murres’ population has been in decline for several years, and Castle hopes that salvage work will prevent the deaths of any more birds.