Photo of the 800-foot CSCL Felixstowe by Philip Gilston

While surfing the internet, I ran across this photo of a ship I sailed on a few years ago (see above).

It brought back fond memories of sailing across the Pacific on the CSCL Felixstowe. I got asked a ton of questions about the trip from L.A. to Shanghai. Here, in no particular order, are some of them along with my answers:

Wonderful, if you like curries. Fortunately, I do. Chief cook Ignacio (Nick) Villanueva had an exhausting job, cooking for 25 of us every day, helped only by messman Lorenzo (Laurence) Ramos.

On Sundays, Jina Noronha, wife of first officer Rodney Noronha, often helped out by cooking biriani for the Indian officers, along with raita, a delicious yoghurty dip.

“We measure our time left in birianis. I’ve got two birianis left,” said Capt. Alfred Gomez, who was signing off shortly.

2. Did you drink every night with the Captain?

Capt. Gomez was a staunch Catholic who discouraged drinking and held Sunday prayer meetings with rip-roaring singing to boost crew morale and camaraderie.

Rum rations for the crew are long gone, replaced by strict anti-alcohol and drug policies. Although beer was allowed off-duty, it was quietly frowned upon. I drank three beers while on board, and even then felt guilty.

The Suez Canal is nicknamed the Marlboro Canal, and if you don’t pay the pilot with cartons of cigarettes, they won’t move the ship. One time the captain finally got a pilot who said he didn’t take cigarettes.

“I’ll just have coffee,” he said, then but then promptly added tea, butter and a huge list of other demands.

“Better you take the cigarettes,” said the captain, finally.

3. Was it risky, a woman sailing with all those men?

Rodney and Annette Noronha on the bridge

No, they were wonderful! And I wasn’t not the only woman on board. When I boarded, first officer Rodney Noronha was waiting to greet me with his wife, Jina, and six-year-old daughter, Annette. Jina and Annette had been sailing with Rodney for the last four months, and on and off ships since Annette was a toddler. The wife and two-year-old son of second engineer Ravi Singh also sailed with us.

The two wives, two kids and myself were all Supernumeraries, an archaic-sounding word also applied to actors who appear on stage but have no lines to speak. Pretty accurate, in this case. I was the Fifth Supernumerary.

4. How long did the trip take?

The ship was pretty fast, with a cruising speed of 24 knots (nautical miles an hour), so it only took 11 days to sail from LA/Long Beach to Qingdao in northeast China.

We sailed the Great Circle route, skirting the Aleutian Islands off Alaska before arching across the Pacific to Qingdao – more than 5,800 nautical miles in all.

A Super Hurricane northeast of the Philippines delayed us a day and at Qingdao, we hit fog. So we arrived in Shanghai at dawn 13 sailing days (14 days by date) after leaving Long Beach. 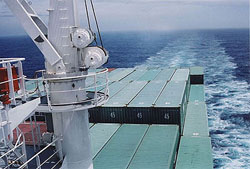 Streaming across the Pacific

I used to throw up regularly on yachts crossing the English Channel. Fortunately, the CSCL Felixstowe rode the waves much better than a small yacht.

The worst times came southeast of Japan, as we hit the aftermath of a Super Hurricane called Dianmu. That night I was lying in my bunk sweating and headachy as the ship pitched back and forth like a bucking bronco. Winds at the time reached Force 8, but we missed the worst of the hurricane.

6. Can I sail on a containership, too?

Containerships don’t usually take passengers, so I was very lucky. The crew is too busy most of the time to look after passengers and there are also insurance complications.

Bulk carriers have more leisurely schedules, and are more likely to take passengers, but they are still not cheap. Several companies cater to freighter travel, though. Check out Freighter Travel and Seaplus.

7. What cargo did you carry?

Actually, a lot of empty 40-footers! We left California with 1,768 empty containers and just 225 full ones, carrying mainly waste paper and scrap metal.

The transpacific trade is notoriously imbalanced: ships loaded with consumer goods arrive in the U.S. from Asia and often return empty.

They were all pretty busy during their work shifts, and during time off, had different rituals.

Typically they’d slump exhausted or bored watching DVDs or listening to music in their cabins. A hard-core of ping-pong fanatics got together regularly in the little on-board gym. My personal memories are of playing the Memory Game on the bridge with little Annette.

Time and again, as we sailed across the Pacific, my desire to idealize the crew’s way of life received a cold dose of salty water from those that lived this life daily. I was looking for adventure while the captain and crew were looking for their floating office to run as smoothly as possible.

Second officer Praveen Menon laughed when I asked if being at sea was a romantic life. “No, I don’t think so. Maybe in a passenger ship, but not a merchant ship. They have the atmosphere to be romantic, but here the atmosphere is not romantic at all. It’s purely work.”

9. Did the crew speak English?

Yes, they all spoke English. Captains and officers are required to speak English if they trade in international waters, and the Filipino crew had learnt English at home.

10. What flag did the ship sail under?

It was all very convoluted, but typical for international shipping. I sailed with 20 Indian officers and Filipino crew on a ship built in South Korea, registered (flagged) in Cyprus, owned and managed by a Canadian company and operated by a Chinese state shipping line.

* See my full story about the trip: Sailing to Shanghai