The Toronto Star listed China’s Urumqi as one of the Top Ten worst places to live in the world in 2008. The reason? Pollution. The list prompted my strangely fond memories of coughing and spluttering through winter in Urumqi while teaching English there between 2005 and 2006.

It’s winter in Urumqi and everyone is out in the streets chipping away at the snow and ice. A huge human effort. Even the local doctor is out in the alley in her white coat and mask, attacking the ice with a spade.

The local government has closed all the major roads downtown until noon, and told the residents to clear the streets. No snowplows here or salting and gritting of roads. Just hordes of people attacking the ice. It’s dirty and grimy, full of soot.

After a token effort, the stall-keepers huddle round tiny coal-fire tin cans, the men wearing Chinese army overcoats and Snoopy sheepskin hats with long earflaps. Only the Uyghurs selling kebabs look warm, with large old-style barbeques for cooking the mutton. 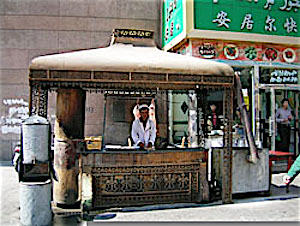 The Uyghurs (pronounced Wee-gur in English) are Chinese Muslims, speaking a Turkish kind of language, writing in Arabic script, praying to Allah, and wearing traditional skull caps and shawls.

Urumqi is the capital of Xinjiang province, in China’s remote northwest, and is surrounded by desert and barren mountains. It has more in common with the neighboring states of Mongolia, Russia, and Kazakhstan than Beijing – more than 3,200 kilometers away.

It’s a small city by Chinese standards, a mere two or three million people, but growing fast and furiously, with skyscrapers and modern office blocks downtown, and a booming oil industry in the surrounding countryside. A world without trees, stark and barren, with low wattage lights, concrete overpasses and thick smog.

When I arrive in October, I start coughing immediately. A hacking dry cough that seems endemic at first, but after about three weeks my body adapts to the pollution. I can almost smell the acid in the air, though: sulfur dioxide from factories and chemicals and dust from farms outside the city.

Minus 35C in the mountains outside Turpan, three hours’ drive from Urumqi, China.(Pix: Alison Bate)

Urumqi is surrounded on three sides by the magnificent Tian Shan mountains, reaching up to 5,000 metres. But the constant haze means we very rarely see them. It’s only when we go on trips outside the city that we escape the blanket of smog, see blue sky and realize: “Oh my God, it’s a sunny day.”

The temperatures drop quickly in late October and we shiver in our concrete apartments, north of downtown. An important person in local government decides what day to turn the heating on the whole city, and that day hasn’t arrived.

Then suddenly the heating is on, the coal-fired power plants crank into high gear just outside Urumqi, and warm air and coal dust pour through the heating vents. Now it’s so hot that even when it’s minus 15 or 20 C, the windows need to be open all the time in my apartment. Fine coal dust settles everywhere, making me grumpy as I wash the floor yet again. I blow my nose: black snot oozes out. My white pants? A big mistake bringing those for work. They have to be washed after just one outing.

I’m teaching at a language school downtown and as we dig in for winter, most of us acquire really bad colds or flu that lingers longer than usual thanks to the pollution. Those with bronchitis are put “on the drip” to receive their antibiotics from Chinese doctors.

I also visit the local doctor with a fiery throat and receive an impressive array of medicine: a mixture of western-style throat pills and Chinese herbal remedies packaged in cute little brown bottles that look very Dickensian. I down them all, and they seem to do the trick.

But now it’s time for work. I buy some nan bread and slither down the hill, muffled up to the hilt, heading past an ugly roundabout and across to People’s Square.

On weekends – work days for us – it’s full of women swaying as they do morning keep-fit, middle-aged couples playing badminton in their street clothes, a brass band in another corner, and others watching a giant TV screen. Impressive ice sculptures occupy another part of the Square.

By April, Urumqi is emerging from its winter cocoon. The snow has melted, we can stride out at normal speed without fear of slipping on the ice, and no longer need thermal underwear and gloves. Old people in wheelchairs are wheeled out into the sun, and the outdoor night markets grow bigger daily.

A couple of months later, it’s 30 to 35C in the city and we buy ice-creams before class, beg for fans for our apartments, and go drinking after work at Wuyi night market. All kinds of nuts are being roasted outside, watermelons are laid out in tempting wedges and more and more people sit outside to eat kebabs.

I foolishly leave Urumqi by train, heading to Chengdu on a 54-hour trip by hard sleeper, packed to the gills. However, it does give me time to reflect on life in Urumqi. Leaving Urumqi is somewhat like leaving the army, I imagine. We can’t wait to escape the busy teaching workload, but miss the camaraderie and claustrophobic coziness afterward. However frustrating the work, however incestuous the gossip, however polluted the city, it was never boring.

8 thoughts on “Winter in Urumqi, one of the world’s most polluted”